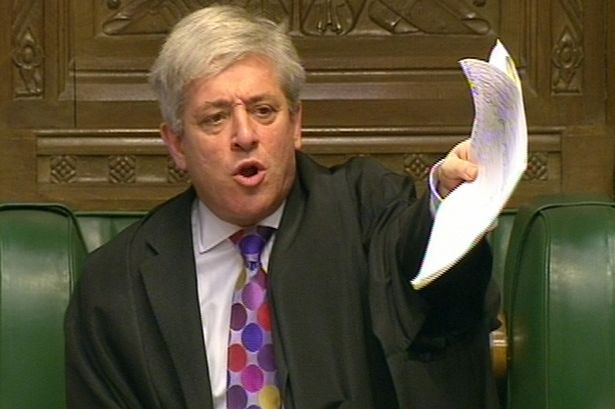 On Monday this week something quite special happened in the Chamber and I wanted to place on record, my support for The Speaker of the House, John Bercow.

As The Speaker, his command of the English language never fails to amaze me (if not leave me reaching for the dictionary) and it has allowed him to manage many a sticky situation in the chamber, often with a unique balance of grace and humour.

Since arriving at Westminster, I have found the Speaker to have a reassuring grasp of the need to both respect the traditions and the heritage of our Parliament, but also embrace every opportunity to reach out to the country, using new techonolgy and media platforms to bring the public and the House of Commons closer together. His Education Centre for schools is just one of the examples that springs to mind.

Whilst the Speaker is elected as a Member of Parliament, on becoming The Speaker, he then serves as a chair to procedings in the Chamber, and seeks to remain neutral and above the politics unfolding inside.

That having been said, when he was asked about a State Visit of President Trump on Monday this week, and the suggestion that it could involve an address to both houses – the House of Commons and the House of Lords -; he made his feelings quite clear that he was not in favour.

I like many others, am worried about the election of President Trump, and whilst I live in hope that the legacy of the ‘Special Relationship’ might give us the opportunity to impress our expectations on him, I believe he still has a lot to prove before members of the UK Parliament would want to see him here.

I am a long way from being satisfied that President Trump shares our values around respect, equality, human rights and upholding the personal freedoms that we hold dear, and my hopes that his actions would not be as severe as his rhetoric were diminished within days of him taking office.

I for one was incredibly proud when the Speaker conveyed the same message to the House and to the world. It comes as no surprise to me that elements of the press, the same press who make a profit selling papers by playing on the same fears that Donald Trump does, have been grossly offended by his decision to take such a stance.

I want to thank you Mr Speaker for upholding the values of our nation and our Parliament. Where the Prime Minister failed, it fell to you, to put party politics aside and simply assert universal values that we can all be proud of.

We all regret that President Trump is currently falling a long way short of those values, and I like many of my colleagues believe that he should not be welcome into the ‘Mother of all Parliaments’ until that drastcially changes for the better.

You can watch The Speaker’s full response to the Point of Order online here:
https://youtu.be/QP0c6smM_NM