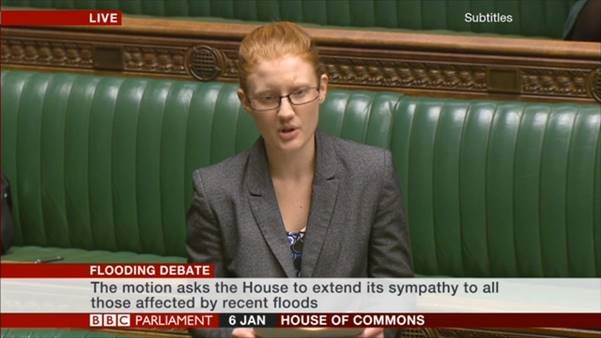 Holly and Calderdale Council leader Tim Swift have expressed their frustration that vital funds for helping with the costs of the Boxing Day floods are yet to reach communities affected by the flooding.

The EU Solidarity Fund provides money for regions hit by natural disasters and has previously granted large sums to help in the aftermath of flooding. In 2008 the UK received around £120m from the EU to help repair damage caused by heavy floods.

Despite his initial refusal to apply for these funds after recent floods, David Cameron U-turned on this position at the end of February under pressure from MPs in flood affected constituencies. With the deadline to apply for the fund just hours away Eurosceptic MP James Wharton made the announcement in the House of Commons chamber in response to an Urgent Question from Labour.

However it was revealed this week that the European Commission still hasn’t begun assessing the UK’s application for EU solidarity funds following the Boxing Day storms – as they are still awaiting the Government’s estimates of the cost of damage from the flooding.

“This revelation is disappointing. I know Calderdale Council has provided detailed information about the cost of the infrastructure damage to the Government and I imagine flood affected councils are all now in a position to do the same. So what is the hold up?

“My biggest fear is that Tory Euroscepticism will creep into this process to the detriment of my constituents and we cannot let that happen.”

Once the Commission has all the information it needs, they would have 6 weeks to assess the application yet any decision would need to be approved by both the European Parliament and the European Council meaning that any benefit to flood affected communities is still months away.

“Calderdale council has been working as hard as we can to get grants out to residents and businesses, as well as keeping government informed about the costs of the flooding to our district. So it’s really disappointing to hear that there’s been little progress on securing European funding.

“I hope also there’ll be a commitment that any funding secured will be directed back into support for the communities worse affected by the winter floods”.