“The thin blue line is thinner than ever” warns Halifax MP 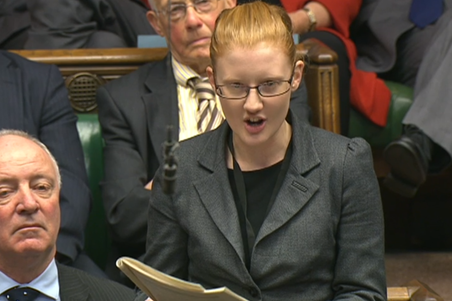 Halifax MP Holly Lynch has expressed grave concerns about the potential impact of government cuts to policing during a speech in the Parliament this week.

Police and Crime Commissioner Mark Burns-Williamson says Government funding for West Yorkshire will fall by between £107 million and £147 million a year by 2019/20.

This could mean that by 2020 the force, which draws 80 per cent of its funding from central Government as opposed to local tax-payers, employs as few as 3,487 officers, a 39 per cent reduction from the total in 2010.

“According to the National Society for the Prevention of Cruelty to Children, all four countries in the UK have seen the number of recorded sexual offences against children increase over the past year, and the type of policing required to identify, disrupt and prosecute those seeking to exploit children and young people is intensive: it takes care, persistence and time.

“Yet there are now 957 fewer police officers in West Yorkshire. The thin blue line is thinner than ever.”

She added: “My conversations with the local police have revealed their worry that policing will become much more reactive-a blue light service only.

“Reactive policing is of limited use when we are striving to secure prosecutions and deliver a zero-tolerance approach to child sexual exploitation.”

She stressed the importance of neighbourhood policing in dealing with events such as the EDL march in Halifax in May saying:

“On the day the EDL came to Halifax, it was thanks to local officers that the march went ahead with limited trouble. They knew exactly where any geographical flash points would be, and they knew where to look on social media to take the temperature of the situation.

“I grew up in a policing household. My dad is a retired police sergeant and one of West Yorkshire police’s finest. I am incredibly proud of all that he achieved in the police, but he would be the first to say that he does not recognise today’s force.”