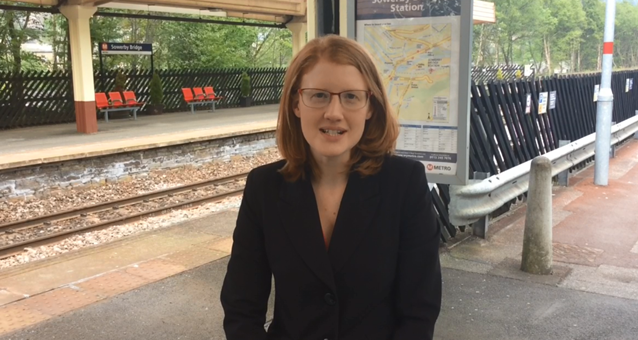 Halifax MP Holly Lynch has warned that proposed changes to rail timetables by train operator Northern could see a cut to services at Sowerby Bridge station.

Northern are currently working with Network Rail to determine the timetable proposals for the Calder Valley Line from May 2018 which will impact the frequency of services, which stations they stop at, and the times of the first and last trains of the day.

Ms Lynch has written to Northern’s Director Alan Chaplin, highlighting a number of changes which she believes will negatively impact rail users in Sowerby Bridge.

“There are many problems with Northern services at present, including massive overcrowding for commuters so I’m working closely with local rail users to ensure that things start to improve.

“I appreciate that it is difficult to schedule trains so that everyone is happy with the result, however it does appear that Sowerby Bridge is being left behind with these particular proposals.

“Cuts to services at Sowerby Bridge could bring a number of problems for rail users. For example those heading for a night out in Manchester could be forced to return home just after 9 o’clock, or pay for a taxi at significant extra expense.

“There are elements here that are to be welcomed such as the new routes to Manchester Airport and Chester due to Network Rail’s construction of the new ‘Ordsall Chord’ in Manchester.

“However, to maximise the benefit of these investments it is crucial that Sowerby Bridge is well served by the new timetable.”

HADRAG and the Upper Calder Valley Renaissance Sustainable Transport Group responded jointly to Northern’s timetable proposals. Welcoming new connectivity, we also listed a catalogue of concerns-unintended consequences maybe of ambitious plans. The train company will have submitted its proposals to Network Rail by now. We hope at least some of our concerns will have been addressed. More detail on website but some key points include: