Delegation to Guatemala and El Salvador

Last week I went on a delegation to Guatemala and El Salvador in Central America in my capacity as the Vice Chair of the All Party Parliamentary Group on Population Development and Reproductive Health.

The delegation was organised by the European Parliamentary Forum for Population and Development and included 7 MPs from across Europe – 2 from Finland, 2 from Spain, 1 from Portugal and 2 from the UK (East Hull MP Karl Turner and myself.)

The delegation represented different political parties but all the MPs belong to our respective APPGs which focus on sexual, reproductive and maternal health and more broadly the rights and wellbeing of women and children. Whilst we keep a close eye on these issues in our own countries, we have a particular interest in their delivery in the global south where the barriers and dangers to women and children are often greater. Our APPGs are supported by the United Nations Population Fund (UNFPA) and the International Planned Parenthood Federation (IPPF) in doing some of that work. 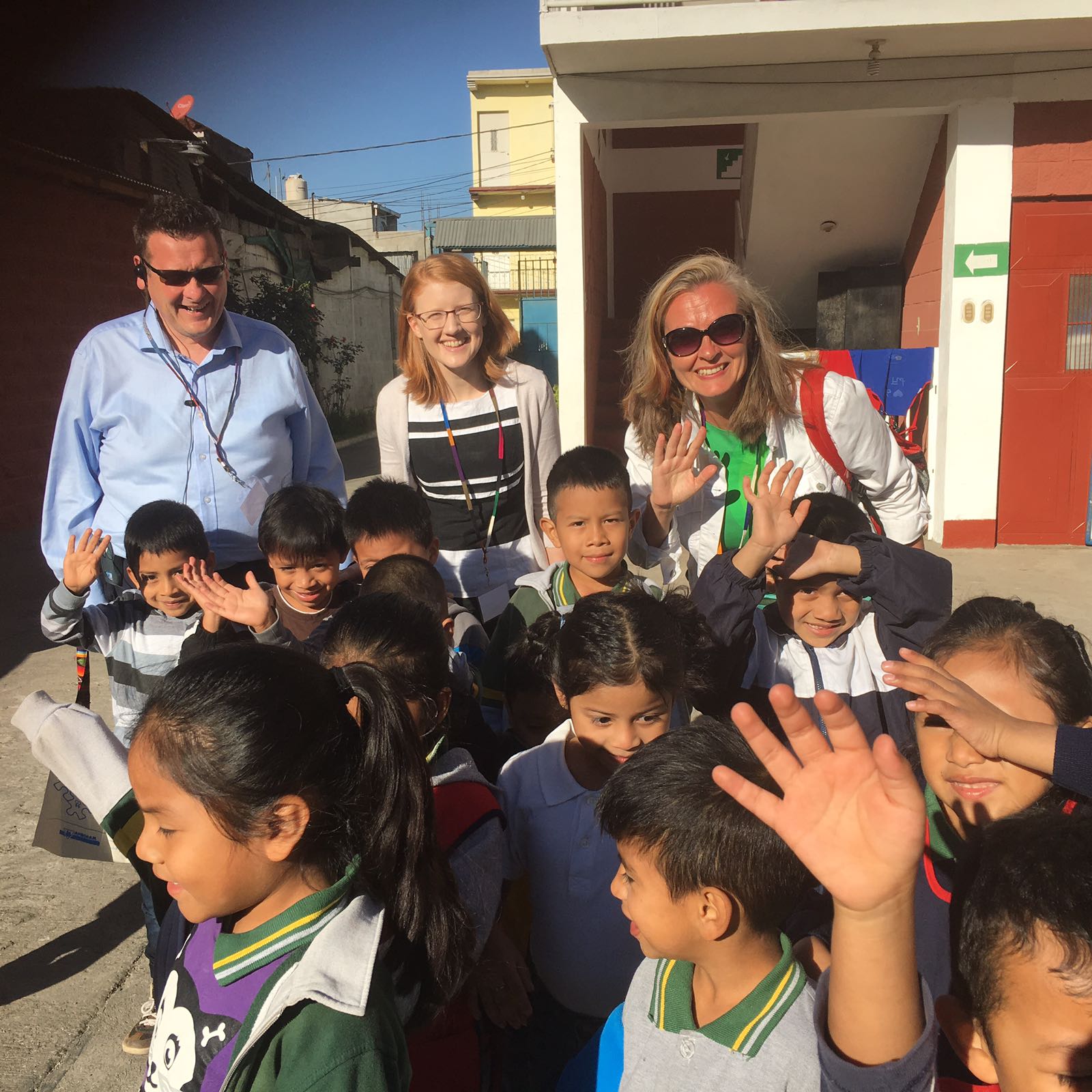 Both Guatemala and El Salvador have fairly recently emerged from particularly brutal civil wars and although much progress has been made since the 1990s, I was surprised to see for myself just how much law and order is still out of control across vast swathes of both countries.

We witnessed some of the worst inequality anywhere in the world and whilst I met some amazing people, particularly those volunteers who are risking their lives in rural areas, where gang violence is a daily threat, in order to deliver women’s health programmes, I was left feeling angry that the Governments of both countries have their priorities all wrong. 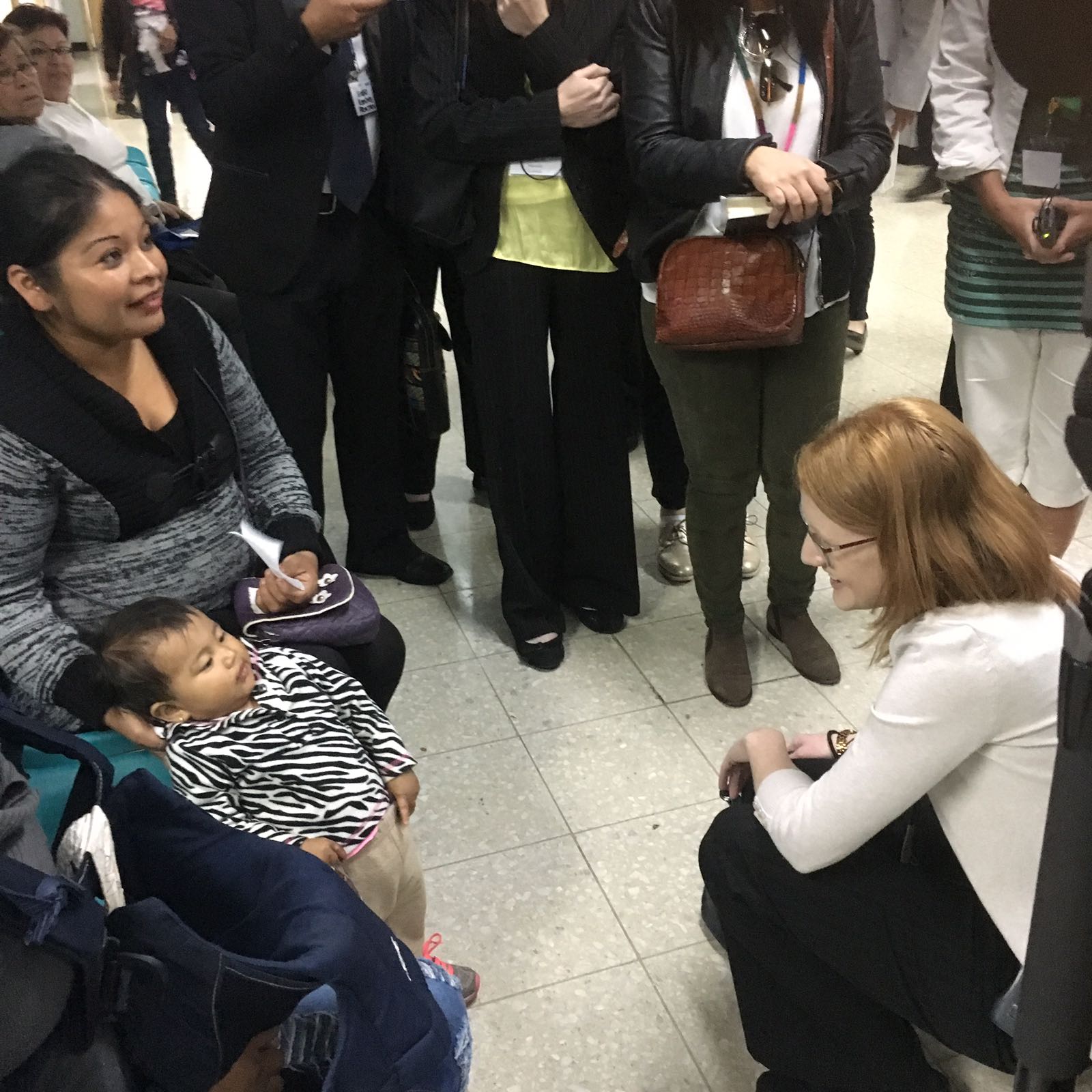 Both Guatemala and El Salvador are deemed to be middle income countries by the World Bank, yet in Guatemala, 60% of the population live in poverty with 23% in extreme poverty.

Health charity Aprofam were our hosts in Guatemala and although the Government has committed to free healthcare for its people, the provision is so poor that healthcare is dominated by private providers. Aprofam are striving to deliver healthcare services right across the country and plugging the gaps in the areas that the state provision is unable to reach. They are part funded by international organisations but are faced with having to ask patients to pay what they can afford towards care in order to continue providing services. 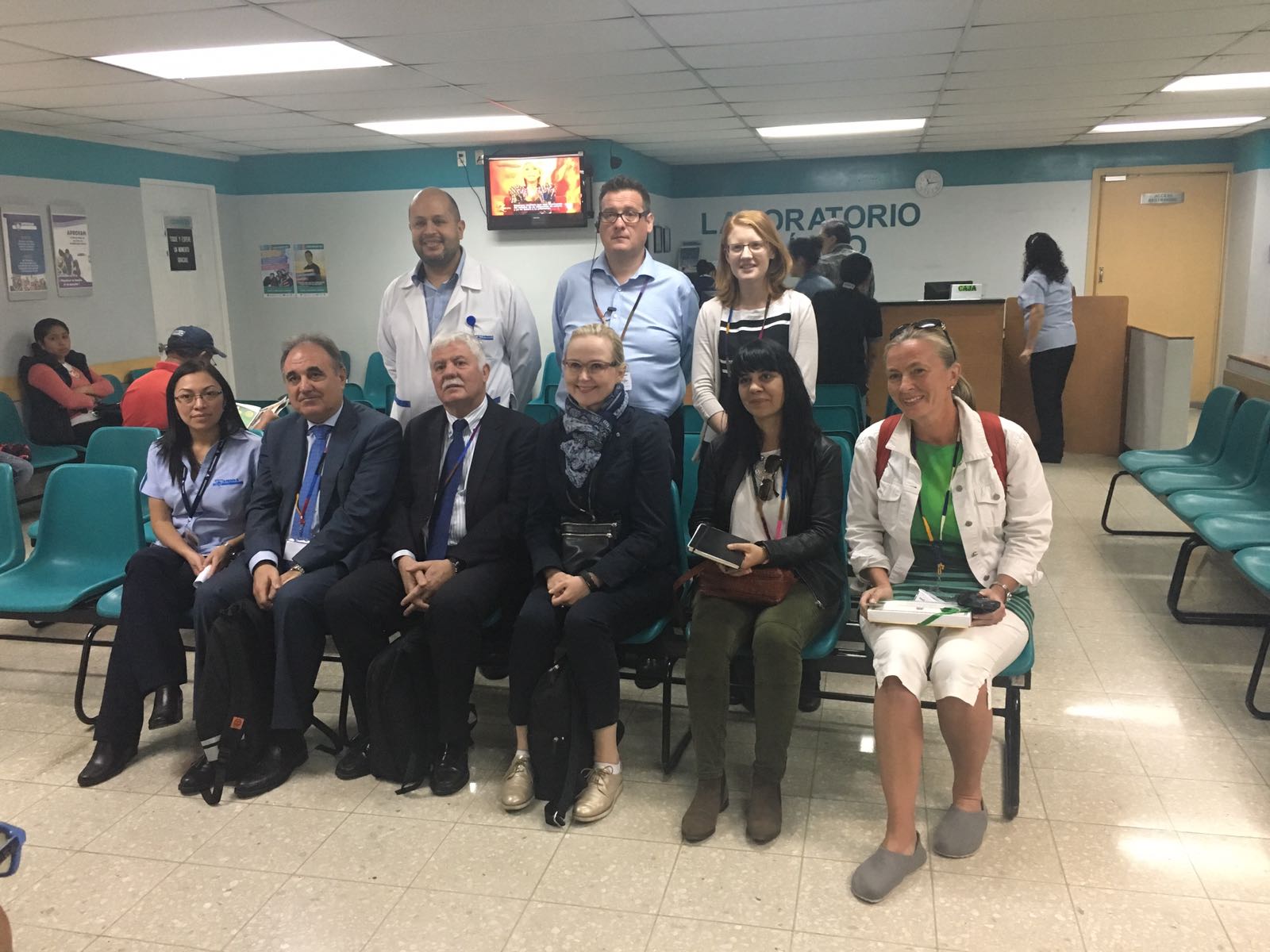 They have a particular focus on sexual and reproductive health for women and children within the low income population and we visited one of their mobile clinics providing contraceptive services to women in one of Guatemala City’s ‘red zones’ where poverty and crime rates are at their highest.

I was satisfied that there is the political will amongst Guatemala’s elected representatives to do the right thing. Progressive laws are being introduced, with strides made towards tackling corruption and delivering better and free, public services.

However, according to the World Bank, the Government collects the lowest share of public revenues in the world, relative to the size of Guatemala’s economy. Tax is set at just 12% and the responsibility is on the individual to declare earnings and pay tax themselves, it is not deducted at source. Needless to say, in a country where tax avoidance has historically been so commonplace and services are so poor, the failure of the Government to implement an effective tax collection system, leaves it unable to deliver against its own ambitions.

The brother and son of the President himself are currently facing corruption charges and whilst this is shocking, failure to pay taxes has been so rife, that it is promising that the judiciary have had the courage to seek out and prosecute such high profile public figures.

We met with Vice President Jafeth Cabrera in the Presidential office, where at times, he was difficult to hear over the protest taking place outside the inner-city office. Public protests are a regular occurrence and unrest will continue to disrupt daily life, unless the Government redoubles its efforts to collect the revenue it needs to deliver services.

We spent the second part of the week in El Salvador and I firstly want to thank the British Ambassador to El Salvador Bernhard Garside who met with Karl and myself on our first evening and shared with us his experience of working in El Salvador and gave us an overview of the situation in the country. 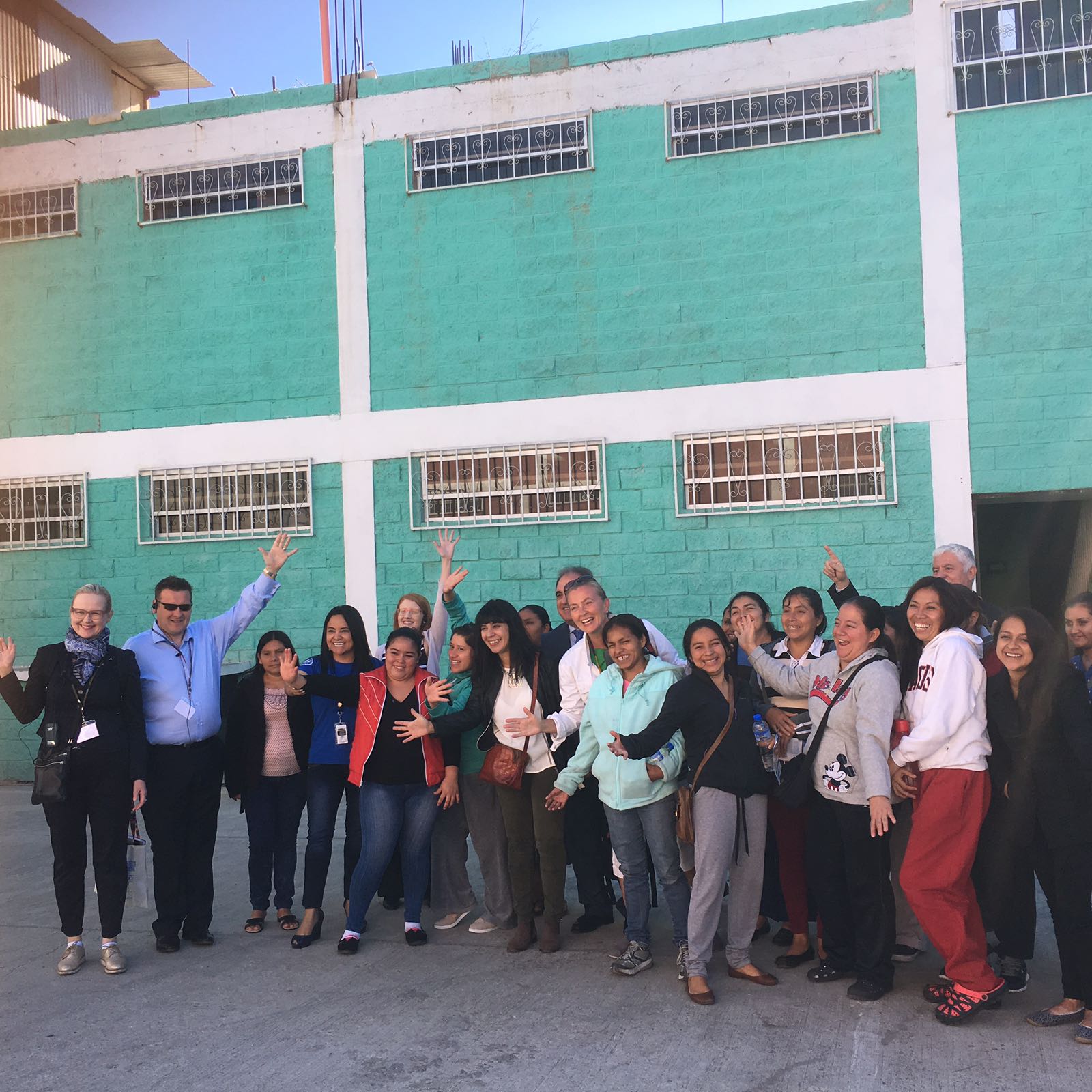 We were hosted by Pro Familia, who like Aprofam, are delivering healthcare, running education programmes and training and coordinating volunteers to go out and deliver them across El Salvador’s rural communities.

I was taken aback by the staggering inequality in El Salvador. Parts of capital city San Salvador could be mistaken for any city in North America, yet we visited whole villages living in shacks with no electricity, no water supply or proper sanitation.

I was particularly offended by the acceptance of gang violence by the authorities. El Salvador has been deemed to be the murder capital of the world with the murder rate recently as high as 44 deaths a day in a country roughly the size of Wales.

Even the Vice President of El Salvador Oscar Ortiz, explained to us that one of the challenges in delivering healthcare programmes is that healthcare professionals cannot enter some districts without permission from the gang leaders which I found astonishing.

The majority of those with both money and influence in El Salvador belong to the Opus Dei strand of Catholicism and since 1998, El Salvador has been one of just six countries where abortion is banned in all circumstances, regardless of whether the mother’s life is at risk, the foetus is viable, or if the mother has been raped – and regardless of her age.

Abortion carries a maximum sentence of 12 years, but prosecutors are increasingly bringing homicide charges against women accused of having an abortion, carrying a 40 year sentence.

I use the word ‘accused’ because Doctors are required to notify the authorities if a woman has a miscarriage, described in El Salvadorian Spanish as a ‘natural abortion’. It is then for the authorities to decide if she has had an abortion naturally, or deliberately. Since 1998, more than 150 women, some as young as 12 have been prosecuted under these absolutely draconian laws.

Sexual violence is rife and teen pregnancy rates in El Salvador are the highest in Latin America, with incest unbelievably commonplace in the rural areas. Unsurprisingly, against this backdrop, suicide is the leading cause of death in pregnant teenagers.

The only hope I found in El Salvador was in some of the young volunteers who were being trained by Pro Familia to be peer mentors within their own social circles but also to be advisors going out into villages to deliver educational programmes and contraception.

We met one young girl who was working 13 hour days, volunteering in areas where gangs controlled the district. When I asked her if she had any protection from the police, she explained that corruption ran all the way through the system and she was safer without them.

We had a number of meetings with elected representatives, where we tried to impress a sense of priority. Why are vulnerable women, some of whom have had miscarriages through absolutely no fault of their own, being pursued through the courts with fanatical vigour, when vast swathes of the country are lost to violent gangs, inflicting terror on all those who live in their districts? Why are your priorities so wrong? 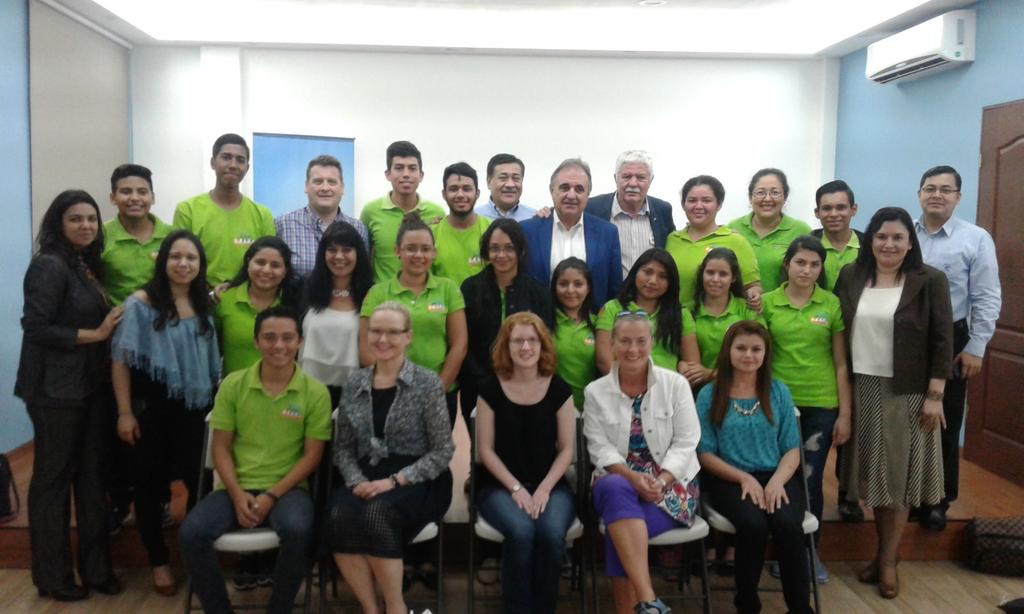 On my return from Central America, I feel desperately angry at the injustice I have seen. I will be working with my colleagues across Europe, to draw attention to the situation and to apply international pressure on the elected Government’s of both Guatemala and El Salvador.

Firstly (and obviously) they must implement systems which facilitate the collection of taxes owed, allowing them to deliver the universal public services that their people deserve.

Particularly in El Salvador but also in Guatemala, Government’s must dedicate themselves to delivering law and order with the same tenacity that they are currently applying to upholding regressive conservative principles. I cannot see how the situation for women will improve without significantly improving safety and security, which is widely understood to be the first responsibility of any Government and I found it unforgivable that the situation had been allowed to be so bad.

Largely, everything that is needed to improve the lives of women and children in Guatemala and El Salvador is already there. It just needs the international community to send a powerful message. That we will be a friend in supporting progress, but that progress is an expectation, and the status quo is not acceptable.

Outcomes for women must improve and I will be working to make sure that sexual and reproductive health are at the heart of that agenda.