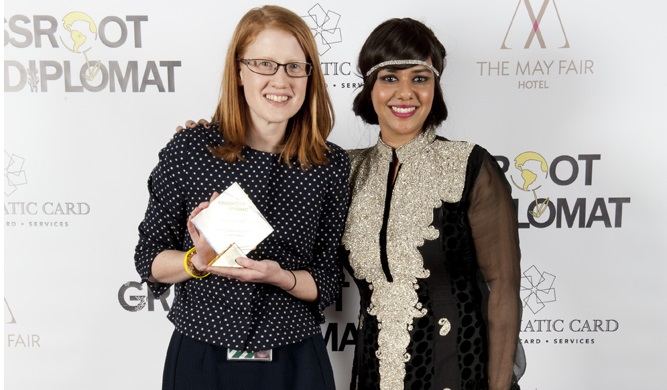 Holly has won an award for her work on Fairtrade just under a year after taking up the role.

Holly was nominated by a constituent for the Grassroots Diplomat award in the ‘Business Driver’ category where nominees are expected to have ‘assisted in creating new jobs or opened paths for greater trade relations that have had a positive effect on society in general.’

Collecting the award at a ceremony in London, Holly paid tribute to the Halifax steering group and all their efforts in launching the campaign over a successful Fairtrade Fortnight.

Holly said; “Fairtrade is a really good way for starting the conversation about how we can give a helping hand, through trade rather than aid, to some of the world’s most vulnerable people.”

“Its also a great platform for recognising those businesses who think carefully about what they buy and sell. The campaign to make Halifax a Fairtrade town is all about giving those businesses that do make ethical and sustainable purchasing decisions a ‘pat on the back’ and saying that Halifax is a great place to come and shop if you want tasty and interesting Fairtrade food and gifts.”

Grassroots Diplomat is a social enterprise that aims to gap between governments and civil society, challenging complacency within diplomacy and politics, and recognising the stand-out efforts of both politicians and diplomats at its annual awards.

There were 10 nominations for the Business Driver award with Holly the only Labour MP in the category.

Holly told the ceremony that she had also established a Fairtrade group in Westminster which plans to hold a workshop on how MPs can set up their own Fairtrade town campaigns and encouraged MPs to come along.

The Halifax Fairtrade group will be celebrating World Fairtrade Day with a schools conference at Halifax Minister on 13th May so please email sophie@fairandfunky.com if your school would be interested in attending.

For full information on Holly’s campaign for Fairtrade click here.