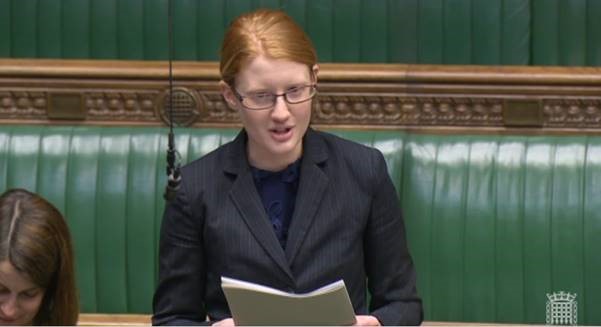 Holly has attacked the government’s proposals to close both Calderdale Magistrates’ Court and Halifax County Court and Family Court at a debate in Parliament. Speaking during the Backbench Business debate Holly highlighted the importance of justice provision saying:

We never know when we might be a victim of crime or witness a crime. We live in hope that we never have a family breakdown so serious that we require guidance from the family courts. Injustice takes many forms and the two courts in my patch play an essential role, not only in righting wrongs but in resolving all manner of often difficult and sensitive disputes.

She added that Halifax still needs its courts even if it isn’t as crime ridden as it is portrayed on television saying:

Anyone who has seen the recent BBC series Happy Valley, set in my constituency, would be forgiven for thinking that surely there was enough criminal activity in Halifax to keep two courts busy, processing criminals, around the clock; perhaps even with enough demand to open a Crown Court due to the severity and frequency of the criminal activity taking place!

But I am pleased and relived to inform honourable members that Happy Valley, whilst thoroughly gripping television, is not an accurate portrayal of law and order across Calderdale, and so back in the real world, and perhaps unlike in other constituencies, we were prepared to see one of our two courts close.

We recognised efficiency savings could be made, and in a move predominantly led by the local magistrates’ bench we actively campaigned for a merging of the courts in a way which would deliver a cost saving for the Government, but access to local justice would have been maintained.

The closure of 86 courts and tribunals have been packaged as part of a technology driven justice revolution that will make justice more accessible than ever before. However Holly highlighted her recent discovery that thousands of pounds have been wasted on this project:

A written question to the Minister tabled on the 7th December and answered on the 29th February, revealed that £1.35 million was spent on delivering the digitalisation programme, in courts which have subsequently been announced for closure.

Whilst the response from the Minister did outline that the vast majority of this expenditure was in re-usable hardware assets which will be reallocated to other sites, representatives from the courts in Halifax tell me that thousands will have been wasted in costs associated with the installation and custom cabling in buildings soon to be closed.

The impact of court closures on town centres across the UK was a concern raised by a number of MPs at the debate and Holly explained how damaging court closures could be in Halifax:

The two courts in Halifax are located at the top end of the town centre and surrounded by a number of law firms in what could be described as a legal quarter. Back in October, I sent a letter to the Secretary of State signed by 13 representatives of law firms, who by no coincidence, are situated within a close proximity to the courts.

Those law firms, paying rates, employing highly educated professionals and paying good wages in my constituency, are now considering their futures in Halifax. Several are considering following the workload to Bradford and whilst I accept that there will still be clients in Halifax, will there be enough to keep all of those jobs here? And to reiterate one more time, there is not as much work for lawyers in Halifax as Happy Valley might suggest.

With the court buildings empty, the potential for a number of surrounding offices empty as a result, would not be at all healthy for that area of the town centre and place quite a burden on the local authority in terms of regeneration.