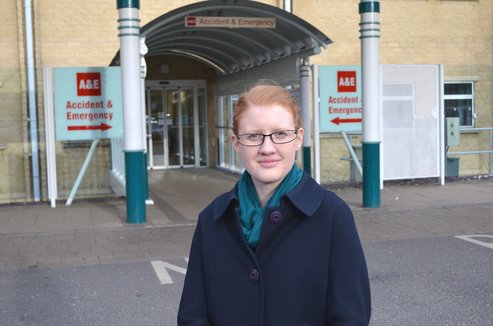 Holly has welcomed the news that Calderdale Royal Hospital is to keep its A&E department in a shake up of local health services in Calderdale and Kirklees.

“This is good news for Calderdale and will be welcomed by local people. At long last we have clarity about exactly what reconfiguration plans will mean for both Calderdale Royal Hospital and Huddersfield Royal Infirmary, ending months of speculation.

“I am glad that NHS bosses have recognised that it would have been totally wrong to have patients travelling from as far as Todmorden to Huddersfield along congested roads in order to get to A&E.

Labour has been fighting the proposed closure of Calderdale A&E since it was first announced and Holly has recently raised the issue in Parliament at Prime Ministers Questions.

She argues that her preferred option would be that neither A&E department would have to close:

“During the general election the Prime Minister came to Halifax and said that he would sort out the financial mess at Calderdale Royal Hospital.

“Since then I have asked him on numerous occasions to show he is a man of his word and step in to offer government assistance to solve the hospital’s financial problems.

“The fact that he has since failed to take any responsibility for his commitments has led to the current situation where local NHS bosses are under financial pressure to alter the way A&E services are delivered.

“This shouldn’t be an issue of Calderdale hospital versus Huddersfield hospital – ideally no A&E should have to close.

“Everyone needs to work together to urge the Prime Minister to deliver the financial support our hospitals need to provide the health service people in Calderdale and Kirklees deserve.”