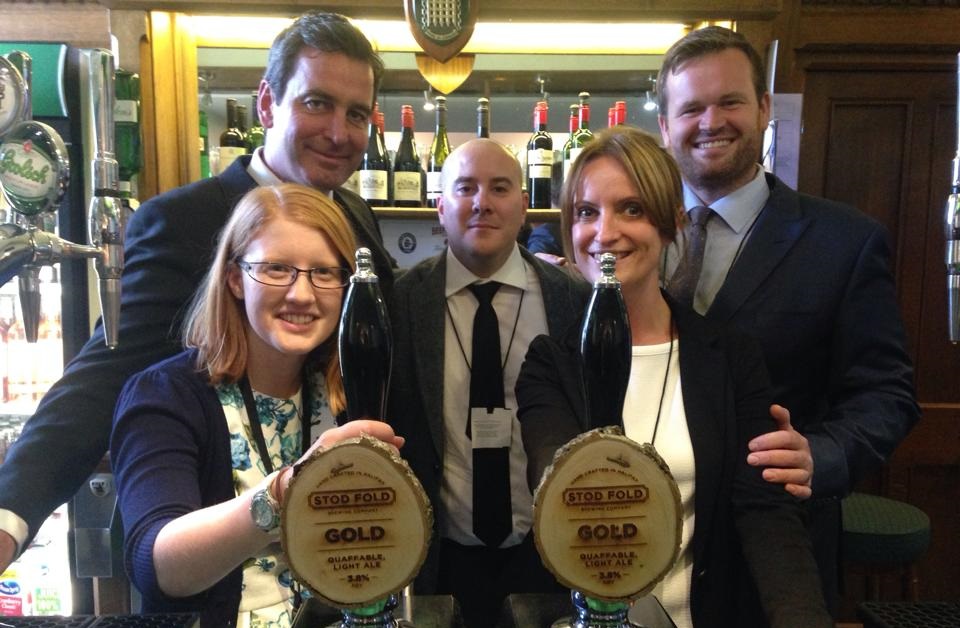 Stod Fold Brewing Company of Halifax  raised a glass of its popular Gold at the seat of Government recently, after local MP, Holly Lynch secured the opportunity for it to go on sale as a guest ale in the Strangers’ Bar, sited inside the House of Commons.

Stod Fold Gold, a 3.8% easy drinking golden bitter was enjoyed by the many MPs and other parliamentarians for whom the Strangers’ Bar is effectively their ‘local’.

Head Brewer Dr Paul Harris along with Partners; Angus Wood, Sam Turner and Jonny Naylor made the journey to London to meet Holly Lynch MP and sample on of the first pints.

Holly said; “The real ale industry in undergoing a huge revival and it is fantastic that MPs and their guests from all over the country will have the chance to sample Stod Fold Gold in one of the most iconic buildings in the world! What a boost for Halifax produce.”

Managing Partner, Angus Wood said, ‘We were delighted that Stod Fold Gold was selected for the Strangers’ Bar and grateful to Holly Lynch MP and the team at the bar for making it happen. We’re very proud of our beers and this was a great opportunity to spread the word further’

He added, “We’d love to think that some major policy decisions were made over a pint of Stod Fold Gold but we are nonetheless delighted that so many MPs enjoyed drinking it.

Stod Fold was made available in the Strangers’ Bar as part of a scheme run by the All- Party Parliamentary Beer Group and the Society of Independent Brewers, to which Stod Fold belongs.

Angus Wood added ‘More information about the brewery and our beers can be found at www.stodfoldbrewing.com