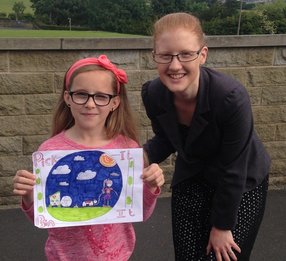 Pupils at Withinfields Primary School are hoping to see their artwork displayed across the community after taking part in the MP’s design a poster competition.

Halifax MP Holly Lynch asked pupils to design posters about respecting their community, having received letters from them about their concerns.

The competition aimed to highlight environmental issues and the consequences that dog fouling, littering and speeding can have in a local area, particularly on children.

After much deliberation, pupil Leah Anderson was declared the winner of the competition thanks to her colourful design which encouraged Southowram residents to put their litter in a bin.

Ms Lynch said: “It is encouraging to see just how many children care about the environment and want to make their local community a more attractive place to live.

I will now raise the children’s concerns with Calderdale Council and I’m hoping to convert the posters into signs, encouraging residents to think twice about littering or allowing their dog to foul in the street.”